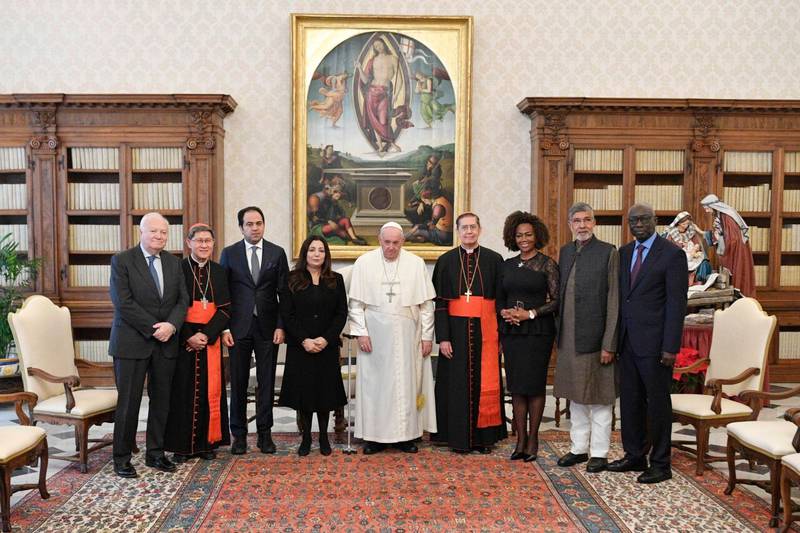 Pope Francis said on Monday that the Zayed Award for Human Fraternity helps to promote the protection of women’s rights.

The award allocates $1 million to an individual, group or organisation from any walk of life that works to further peaceful coexistence anywhere in the world.

It was first established on February 4, 2019, to mark the meeting between Pope Francis and the Grand Imam of Al Azhar, Ahmed Al Tayeb, in Abu Dhabi.

Speaking in the Vatican during a meeting with the 2023 judging committee, he said the award promotes human fraternity on a global scale.

“Your work is important in advancing the message of human fraternity,” said Pope Francis, who was an honorary recipient of the award in 2019, alongside Dr Al Tayeb.

“It is important in your work to uphold the dignity of women as women’s rights are often outlined on paper but not practised in reality.”

He highlighted the ongoing crisis in Haiti and urged the international community to support the country.

Haiti’s Foundation for Knowledge and Liberty received the award in 2022, along with King Abdullah II and Queen Rania of Jordan.

Judge Mohamed Abdelsalam, Secretary General of both the award and the Muslim Council of Elders, said the committee is “extremely grateful” to Pope Francis for his continued support.

“His holiness presents a real and unique example of a man of peace and continues to bring people together from different walks of life, with the feeling that we are all members of the same human family,” he said.

“It highlights and supports the people fighting against discrimination while working towards peace and fraternity,” Ms Barr said.

“We have most recently seen the impact of this award in Haiti, where our sisters in FOKAL continue to create a just, equitable environment for the women and youth. The award is a source of inspiration to support women’s rights.”

Other members of the independent judging committee include: Miguel Angel Moratinos, UN Under-Secretary-General and High Representative for the Alliance of Civilisations; Cardinal Luis Antonio Tagle, Pro-Prefect of the Dicastery for Evangelisation at the Holy See; Kailash Satyarthi, 2014 Nobel Peace Laureate and child rights activist and Dr Ouided Bouchamaoui, 2015 Nobel Peace Laureate and entrepreneur.

The judging committee is in Rome to continue its deliberations on the 2023 award, with the winners announced during a ceremony on February 4.