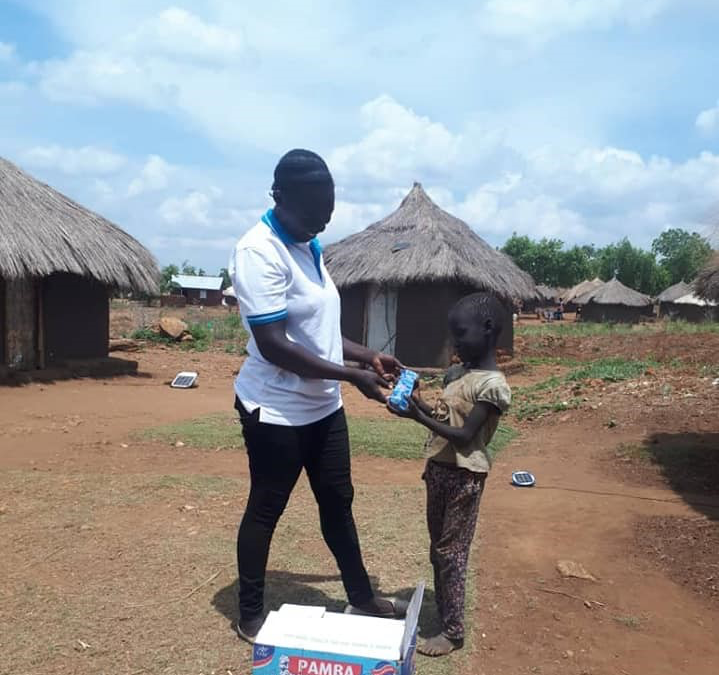 This blog post is courtesy of the 100 Million Campaign

Forced to flee from war and disaster, children now living in refugee camps are feeling the impact of COVID-19 acutely, particularly on their basic rights to safety and protection. Overcrowded refugee camps are no place for a child at the best of times, but restrictions enforced due to COVID-19 are compounding their problems, and could have a devastating impact for the rest of their lives.

100 Million is working with youth activists in Uganda, who explain the current situation for child refugees, and what they are doing in response.

OVERCROWDED REFUGEE CAMPS IN UGANDA FEELING THE WORST IMPACTS OF COVID-19 MEASURES
Uganda currently hosts over 1.4 million refugees, the highest population in Africa and the third highest in the world after Turkey and Pakistan. Approximately a quarter of the refugee population are children, thousands of whom are unaccompanied by any adult family member.

By late March, like most governments, Uganda had responded to COVID-19 with lockdowns, quarantines, and curfew. However, these policies could not be more out of touch with what is needed or possible for the country’s huge refugee population.

Refugee camps in Uganda – or indeed, anywhere in the world – are neither designed nor equipped to deal with pandemics of this nature. The minimum standards for a typical camp call for a maximum of 120 people to one water tap, and 3.5 square metres of living space per person. Most camps in Uganda are operating beyond this capacity, making simple protective measures, such as hand washing and social distancing, next to impossible. Some work has been undertaken by UN agencies to increase access to water facilities, but progress so far is a drop in the ocean.

Compounding this situation was an announcement by the UN’s World Food Programme in April of a 30% cut to food rations to camps in Uganda, citing insufficient funds. As WFP grapples with a $137 million deficit, they warn that further cuts may follow.

For refugee children, the measures being taken by the government to effectively close the country’s borders could prove deadly. While this measure is in line with other countries to combat the spread of COVID-19, it places any child who is trying to flee conflict from neighbouring countries like South Sudan or DRC in even more danger. Just because a border is closed does not mean that people will not try to cross; it is likely that desperate children will put their lives at further risk to enter Uganda.

REFUGEE CHILDREN ALREADY SUFFERING
Youth activist Seme Ludanga Faustino lives in Bidibidi refugee settlement and co-founded the youth-led organisation I CAN SOUTH SUDAN, which works with the 100 Million campaign. Seme has tried to continue I CAN’s work despite the enormous impact the restrictions are having.

With almost every refugee living in Uganda having fled conflict in countries without functioning governments, it is understandable that there is a distrust of government and people are reluctant to obey directives. As Seme explains, the refugee population “don’t have access to any reliable news provider,” leaving them especially susceptible to misinformation on COVID-19 and how to protect themselves. For children who rely on adults to keep them safe, an uninformed caretaker can be the difference between life or death.

Before the pandemic, the UN’s refugee agency, UNHCR, had reported that 80% of refugee children were enrolled in schools. Widespread school closures have meant that where possible, education is being shifted online, but children living in camps “don’t have any point of access to any point of study,” says Seme, referring to the lack of internet access and facilities.

Seme is extremely concerned about the plight of unaccompanied child refugees, of whom there are over 5000 across just three of the 13 camps in Uganda. While many have protection from foster parents, the combined impact of adults forced out of work and the food shortages are leaving people desperate. The need to access food and other supplies could result in horrific situations for refugee children, including early marriages and a rise in child labour. Given the stressful situation, it is likely that incidents of gender-based violence, as well as child abuse, may go up.

YOUNG PEOPLE AT THE HEART OF THE RESPONSE
However, there is a wave of young community leaders who are actively creating community-based responses to strengthen preventative actions and help save lives.

Seme’s organisation has shifted from providing essential trauma relief through music, art, drama and dance to distributing soap and visiting unaccompanied children at home to teach them how to keep themselves safe from coronavirus.

Young community leaders are also coming together to propose urgent measures, based on their experience at the grassroots, to be undertaken by the Ugandan government as well as non-state actors to protect refugee children in Uganda.

Image courtesy of I CAN SOUTH SUDAN.