Reflections on the 100 Million Youth Leadership Caucus | Kailash Satyarthi US 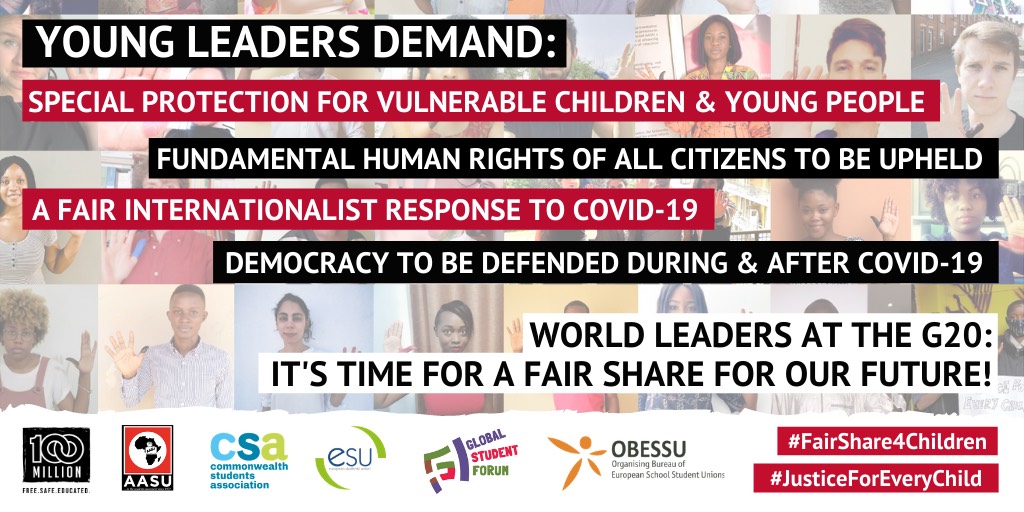 My name is H.D. Wright and I was a U.S. representative at the 100 Million Youth Leadership Caucus this month. This Caucus was aimed at bringing together young leaders from across G20 countries and the 20 most populous countries, to discuss what a fair, just and moral global response to COVID-19 should be. The outcomes of the smaller caucus fed directly into a public high-level event on the 6th of November, led by young people and including special guests, to issue a direct challenge to the G20.

This caucus  provides a great example to the world of how necessary it is to work together, across borders, cultures, and languages, to begin to address the pandemic and the broader systemic issues that it has revealed. Implicit in that recognition is the understanding that not one nation can solve the world’s problems and advocate for the world’s most vulnerable people alone, regardless of the wealth and power that one nation may possess. It is only through multinational, intergenerational cooperation that we can meet the challenges of this moment and this generation.  I believe that the word that most stands out to me in describing this event is ‘potential.’ The potential power of our collective voices to bring about the changes we have advocated for. The potential power to not only work to address the crises posed by the pandemic, but to work together even once this challenge has been overcome to better prepare for the next one, and emerge even stronger. And that is what we, as young people, have begun to do through the 100 Million Campaign. Join us and the 100 Million campaign in making our demands a reality.

It was an honor to be among such an inspiring  group of young leaders from countries all around the world. I was profoundly impressed by the passion, eloquence, and optimism of each student who spoke. Each of them gave me hope. I almost hesitated to speak, as I could have listened to everyone talk so passionately and eloquently about the countries and issues they advocated for rather than speak myself. However, as you can read below, I chose to use my time to speak for the most vulnerable young people, and not just those who reside in the United States.

“My name is H.D. Wright, I’m a senior in high school from New York City, and I think this conversation and the document that we produce as a result of it would be incomplete if we did not discuss the most vulnerable young people around the world: young people who have been displaced and now live under the label ‘refugee’, those who have fallen victim to child labour and trafficking, and homeless youth.

I bring up the vulnerability of this demographic because I know them, in my own city, and from the refugee work that I have done in Za’atari refugee camp, the largest Syrian refugee camp in the world, and Al-Wehdat refugee camp, the largest Palestinian refugee camp in Jordan. I know that these young people were already among the most vulnerable members of our global society before the pandemic, but the pandemic has greatly exacerbated their living conditions and made their already precarious safety even more uncertain.

Although it is difficult to ask our governments to help these people when our own citizens are struggling, I believe that we have a moral responsibility to do just that, especially since the capabilities to provide further aid exist already. If we do not, we risk the loss of an entire generation of young people who would have grown up to become doctors and lawyers, teachers and leaders — changemakers. The loss of humanity itself is a terrible thing. We must use our voices and our resources to prevent this, even before taking into account what these young people will add to society.

In considering the global and domestic responses that must be adopted to protect and uplift the lives of these young people, we must first recognize the underlying systemic issues and the lack of social safety nets that have contributed to this humanitarian crisis: lack of healthcare, lack of public housing, and lack of quality public education–programs that should have already been in place, because without them we live in societies governed by the unchecked greed of pure and corruptive capitalism that breeds widening inequalities and leaves the vulnerable at great risk.

To protect the most vulnerable today, we must provide the programs that we failed to provide yesterday, and quickly, because with each passing moment lives and futures hang in the balance. We must also reevaluate our value systems, because it is this lack of empathy and compassion for others that has created these cold systems of inequality that were not prepared for disaster of any kind.”

H.D. Wright is a refugee activist, writer, and the Editor-in-Chief of the political journal TransnationalPolitics.com. He is currently a senior in high school in New York City. You can connect with him via email at hdwright@transnationalpolitics.com