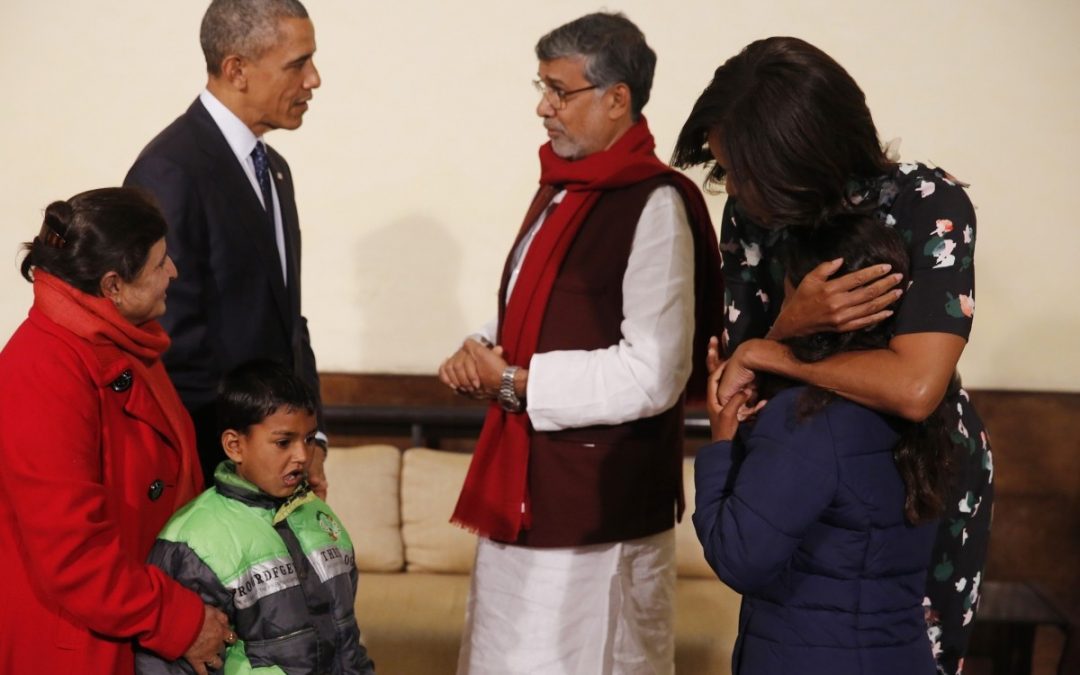 ENDING THEIR THREE-DAY VISIT TO INDIA, US PRESIDENT BARACK OBAMA AND FIRST LADY MICHELLE OBAMA BID GOODBYE WITH A NAMASTE GESTURE AND FLEW FOR THEIR NEXT STOPOVER – SAUDI ARABIA.

Before leaving, Obama addressed at least 2,000 people at the Siri Fort Auditorium in New Delhi and spoke about the future of India and US and how both the nations can help each other further strengthen their relationship.

The Obamas met Indian rights activist and Nobel Prize awardee Kailash Satyarthi and his family. Obama even stepped down to personally greet the people gathered at the auditorium and shook hands with many of them, while some clicked selfies with the President.

Obama, who arrived in New Delhi early on Sunday morning for his three-day visit to India, was welcomed with a guard of honour led by a woman Armed Forces officer at the presidential palace, Rashtrapati Bhavan.

He then visited Rajghat to offer floral tribute to Mahatma Gandhi, planted a peepal sapling and went on to sign the visitor’s book, where he wrote “…the spirit of Gandhi is very much alive in India today. And it remains a great gift to the world. May we always live in his spirit of love and peace—among all people and nations”.

After paying homage to Gandhi, Obama spent some time with Modi at Hyderabad House where they spent time in private sharing moments from life and work over some tea. It was there that the bonhomie between the two leaders came to the fore.

Their friendliness was evident when Obama told media at a joint press conference with Modi that they compared “how much sleep each one of us is getting and it turns out Modi is getting even lesser sleep than me, but of course that’s because he is still new. After he’s does this for about six years, he’ll be getting an extra hour”.