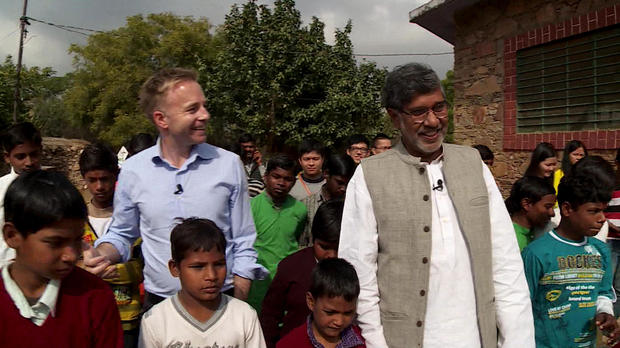 SATYARTHI RECENTLY MET WITH PRESIDENT OBAMA BUT GETTING A GREETING FROM THE CHILDREN IS ALL THE REWARD SATYARTHI NEEDS FOR FREEING THEM FROM A LIFE OF SLAVERY. STILL, SATYARTHI SAYS, HE DOESN’T THINK THE KIDS SEE HIM AS A NOBEL PEACE PRIZE WINNER.

“They see me as a friend or brother or something like a father,” he explained.

At his shelter in Rajasthan, he tries to give these kids the childhood they missed. India has at least four million child laborers—many were abandoned by parents unable to care for them, or sold as cheap labor to farms. Others work in factories, quarries, and small shops.

“Who won the Nobel Prize?” he asked the children.

“All of us kids,” they replied.

One boy we met worked in a small grocery until he was rescued four years ago at age nine.

“Children are preferred because they are the cheapest source of labor and the adults are denied jobs because they are expensive labor, they can fight for their rights—they cannot work long hours,” Satyarthi told me.

Satyarthi organizes raids with local police but sometimes employers are tipped-off and waiting for him—armed. In 2004 he was attacked trying to free kids working for a circus.

He told me that although he once had a gun held to his head, he believes the work is as thrilling as it is dangerous.

“Why thrilling?” I asked him.

“Because I know that somebody has to pay the cost for freedom,” he answered. “It does not come on a plate, so if not me then who else will do it.”

In his no frills New Delhi office he keeps count of how many children they’ve rescued. It’s the same office that received many knocks after he won the Nobel Prize, although many in the press didn’t know what he looked like, said Satyarthi.

“The media people started pouring in this office,” Satyarthi said. “The biggest problem was to identify who is Kailash Satyarthi.”

Satyarthi has wasted no time using his new-found fame. He asks: “Can the world call itself civilized as long as any children, anywhere, are enslaved?”