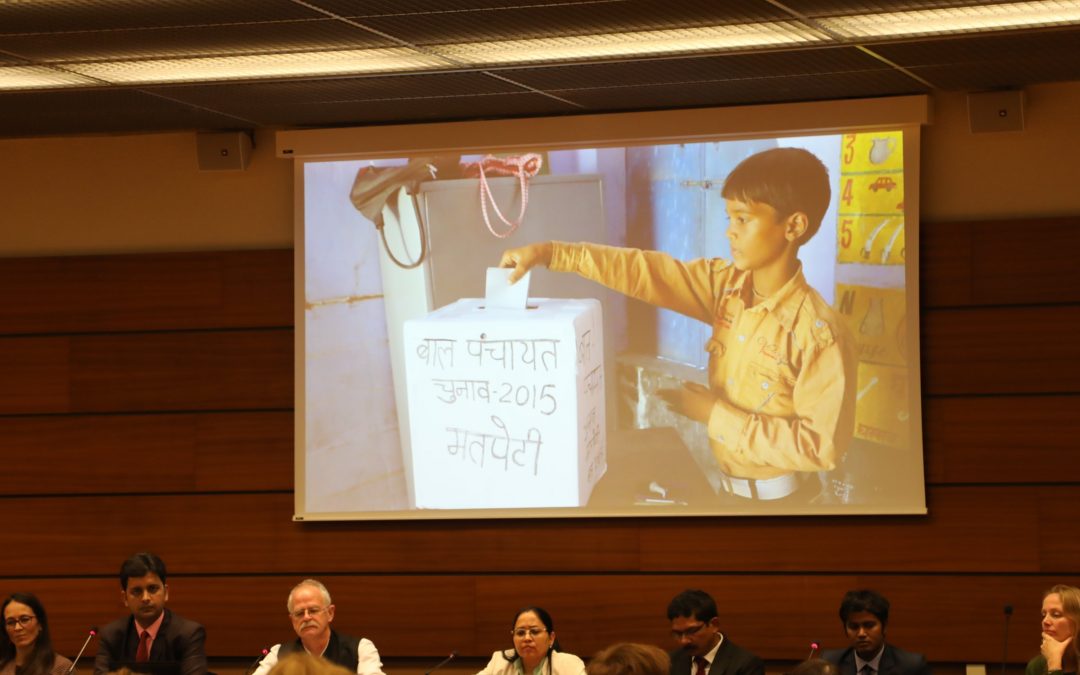 November 25, Geneva, Switzerland: The Kailash Satyarthi Children’s Foundation, in collaboration with the Estee Lauder Companies, brought together a panel of experts and leaders at the UN Forum on Business and Human Rights to share best practices and highlight their successful Child Friendly Village (CFV) model that is working to create a child friendly mica industry in India.  The forum is taking place from 25th to 27th November at the UN Headquarters in Geneva, Palais Des Nations.

Mica, a group of minerals, is found in a wide variety of consumer goods and industry materials including cosmetics, car paint, electronic components, and construction materials. India is a major supplier of mica to an increasing world market, worth approximately $500 million. Research indicates that 25% of the world’s mica production comes from collection in Jharkhand and Bihar. Child labour is a rampant problem in the mica industry in India.

The Child Friendly Village model directly addresses the problems that create and maintain child labour by attacking the root causes to ensure sustainability of the eradication of child labour. CFVs emphasize child participation, community mobilization, the promotion of education, victim’s/survivor’s empowerment, gender equity and awareness on gender issues, the convergence of various government schemes and programmes and ensure the long term sustainability of the initiatives through the creation of individual community infrastructure needs based on community mobilization and resources base.

Recently the model has gained the support of the state government to scale and replicate Child Friendly Villages to make the entire state of Jharkhand child labour free.  During the session, the Principal Secretary of Jharkhand announced the district level directives to work with KSCF to execute the state level agreement.  This announcement comes after his visit to Child Friendly Villages last week.

One of the panellists, twenty-two-year-old Mohammad Manan Ansari, is a former child labourer in mica mining in Jharkhand, who was rescued in 2007 at the age of eight by Nobel Peace Laureate Kailash Satyarthi.  Manan, who started working in the mica mines at the age of six, shared his views on child labour in the mica industry stating, “I had to crawl inside the mines to dig out mica. I was lucky enough to be rescued but not everyone is as lucky. I remember, one of my friends, who was around 10 years old, got into the rat hole to collect mica and the entire mine collapsed on him.”

Manan challenged the audience when he stated, “Today, I stand here with the same questions that I asked in 2009 at the ILO and in 2014 at the Trust Women conference, often governments, non-governmental organizations and companies make agendas that they will work with zeal and compassion to eradicate child labour.  However, it doesn’t happen and that is why I’m still asking the question.  How much longer will I have to keep asking the same question?  We need action now.”

The session put forth the findings from multi-stakeholder collaboration over several years to eliminate child labour in mica mining in India. The discussion featured findings from business and civil society as well as the State Government of Jharkhand who highlighted measures they have taken to protect children in their state from business-related human rights abuses through the replication of the Child Friendly Village model.

In addition to Mr. Mohammad Manan Ansari, the panel included:

About the Kailash Satyarthi Children’s Foundation

The Kailash Satyarthi Children’s Foundation (KSCF) envisions a world where every child is free to be a child. Our mission is to end slavery and ultimately violence against children. To make this a reality, we are scaling 2014 Nobel Peace Laureate Kailash Satyarthi’s almost four decades of work at both the grassroots and global policy level. His lessons learned guide the Foundation’s work to engage children and young people as part of the solution, build greater collaboration between governments, businesses and communities, ensure effective national and international laws, scale know-how, and replicate successful practices in creating partnerships with key stakeholders.  To learn more about the Foundation, please visit: http://www.satyarthi.org.