Kailash Satyarthi and child labor survivors at Fifth Global Conference on the Elimination of Child Labor in Durban, South Africa

The Fifth Global Conference on the Elimination of Child Labor was hosted by the Government of South Africa in Durban between 15-20 May, 2022. Convened with only three years left to achieve the goal of the elimination of all child labor by 2025, as established by SDG Target 8.7, the conference was a critical moment to call for urgent measures needed to accelerate the elimination of both child labour and forced labour. The Kailash Satyarthi Children’s Foundation US supported a large delegation of child labor survivors and activists, led by Nobel Peace Laureate Kailash Satyarthi.

“I am angry to say that 1 out of 5 children in Africa are working as child laborers, whereas in the rest of the world, 1 out of 10 children are working. When we first held this conference, the number of child laborers in Africa and the number now is the same – between 1997 and now. And in the meantime, the wealth of the world has doubled. You cannot blame Africa. I am angry to say this is happening because of a discriminatory world order.”

Mr. Satyarthi gave an impassioned speech on the opening day of the conference, pointing out that child labor in Africa had been increasing for the four years prior to the global pandemic, and calling for immediate action to end the discrimination which has forced millions more African children into child labor – when the rest of the world has managed to reduce it.

Survivors and youth activists for children’s rights also took center-stage during the conference. 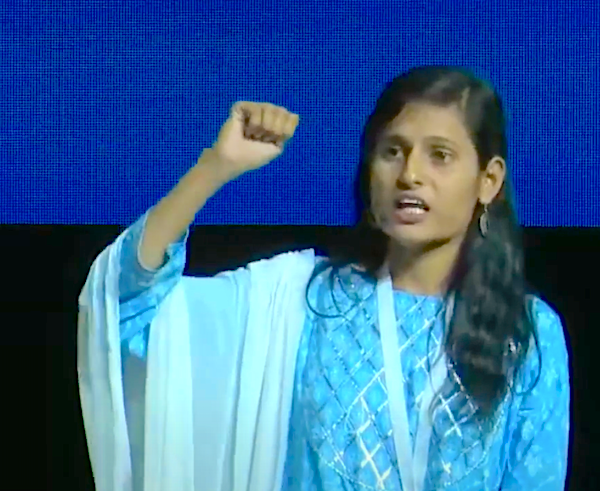 One of a delegation of 11 young changemakers brought to Durban by KSCF US, Tara, now 17 years old, was just 8 when she was withdrawn from road cleaning and construction work in Rajasthan, India. Today, she is in college and hopes to join the police force. Tara is not just the first girl, but the first child in her community, to pursue higher secondary education. She also prevented her younger sister’s child marriage and convinced her family to send her sister to school. Tara has enrolled more than 22 children from two other Banjara communities in school – and there is no child labor or child marriage in her village today. Tara gave a stirring speech alongside Nobel Laureates and world leaders at the ILO conference.

A Call to End Child Labor: Laureates and Leaders for Children

At the request of the hosts, the Government of the Republic of South Africa, the Kailash Satyarthi Children’s Foundation organized a plenary session, ‘A Call to End Child Labor’, which was held under the auspices of the Laureates and Leaders for Children initiative. Speakers included Nobel Peace Laureates Leymah Gbowee and Kailash Satyarthi, alongside former Prime Minister of Sweden, Stefan Löfven, South African Employment and Labour Minister, Thembelani Thulas Nxesi, and child labor survivor-advocate, Lucky Agbovar. The high-level session saw unified calls for social protection to provide a foundation of support for marginalized children and their families, as well as urgent actions to end child labor:

A report from the Laureates and Leaders session is available here.

The Fifth Global Conference concluded with the Durban Call to Action, which makes recommendations to: