HOW WE CAN MAKE EDUCATION FOR ALL A REALITY 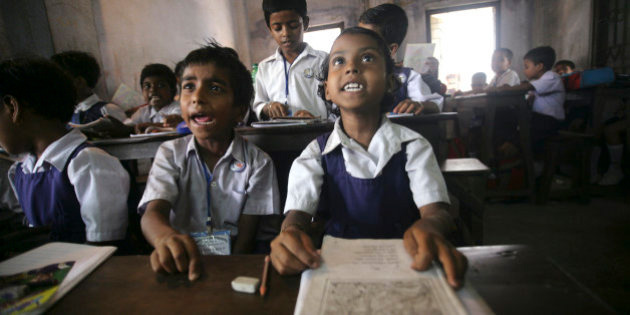 Can we really call ourselves civilised when 168 million children are child labourers out of which 85 million are engaged in seriously hazardous work?

A few days ago I attended the international launch of the Global Monitoring Report on Education for All goals. This is the annual report card of the governments and international community on their performance in delivering education. This time around the report spells out the achievements and challenges faced during the period 2000-2015.

I recall those days and even nights back in the year 2000 in Senegal when we drafted and finalised the Education for All Goals. I was a part of this exhaustive process that involved thorough discussions and deliberations with government representatives and other stakeholders. These goals were not mere dreams. All of them were quite achievable.

Yet, today education is undeniably under attack. The families of students who were brutally assassinated in Kenya are still in shock. It has been over a year since the 200 Chibok schoolgirls were abducted in Nigeria. The massacre at Peshawar was devastating. I was shattered when a mother in Peshawar told me that “I had sent my son in uniform but received his dead body in a coffin”. The very fact that the school bag and water bottle were still on the body of this child proves that one can kill the innocent, but one can never kill education.

Even if a single child is denied education, I cannot celebrate. One child who is not in school is one too many. I refuse to accept that the world is so poor that it cannot bring all its children to school.

Education is under threat because donor governments have failed our children time and again. Isn’t it a pity that in today’s knowledge-driven world less than 4% of global aid goes for education? I was one of the founding members of the high level group on education in UNESCO in 2001. I underlined again and again that until we address the issues of hardest-to-reach children, we cannot achieve the rest of the millennium development and education for all goals. Millions of children are trapped in slavery and bonded labour. Millions of children are sold and bought like animals. Girls are all the more vulnerable to gender-based violence. They are invisible slaves working as child domestic labourers.

Recently I was traveling in remote areas of the Ivory Coast. I met a child who was born in 2000, the same year when the International Community had pledged completion of Universal Primary Education by 2015. In fact he was born in exactly the same year and month. He had been working at a cocoa bean (the main ingredient of chocolate) farm. He was a bonded child labourer. It was difficult to communicate because of the language barrier. With the help of my colleagues, I asked the boy, “Do you like chocolates?” To my absolute surprise, he said, “What is chocolate? I’ve never tasted it.” I said, “You produce the main ingredient of chocolate and you have never had a chocolate?” With the help of my colleague I told the boy “We will help you go to school”. The child asked, “What is a school?” I said, “It is where you get an education.” The boy replied, “It is too late for me to go to school.” A 13- to 14-year-old child feels that it is too late to go to school. What a travesty!

I was in Latin America where a local organisation had rescued a group of girls from the street. I started talking to one of them. She was also born in the year 2000. I said, “You are free now. You can go to school. ” She replied, “It is too late for me; I am no longer a child.” The girl had been sexually abused. She had lost her sense of childhood.

Can we really call ourselves civilised when 168 million children are child labourers out of which 85 million are engaged in seriously hazardous work?

Another threat that looms large is the ever growing intolerance among young people. The rate at which this intolerance is converting into violence is shocking. Trust you me, the day is not too far when this situation becomes irreparable and the world will be at the point of no return.

All these challenges can only be addressed by education. Education should be such that is able to respond to global crises and inculcate the objectives of life, future security, mutual respect, value of global citizenship, human values and morals and most importantly the virtue of peace. The journey of education should logically lead to employability, entrepreneurship, empowerment, equity and ethics.

Education is the key to human rights and development. When one door of a classroom opens for a child, a million doors of opportunities open up. There is no other tool as powerful as education to break the shackles of mental and social slavery. Education is the pre-requisite for social and economic justice, sustainable societies and effective democracy. There is no source of light as bright as education. One cannot imagine any beauty in society without education.

An additional US$22 billion a year is required for basic education, which is even less than a week of global military expenditure. Are we asking for the moon?

Without re-inventing the wheel every time, we can learn enough from the successes already achieved in promoting education. From my experience as an activist for over 35 years now I would like to share with you the 10 success mantras that have stood the test of time in countries giving a big boost to education. Education has prospered:

(1) Wherever governments have demonstrated political will and honesty towards children through sufficient budgetary allocations, and where donors have pledged long-term predictable financing for education.

(2) In countries that have made and enacted laws for Right to Free and Compulsory Education and where there has been inter-departmental coordination and convergence of policies and programmes.

(3) In countries that have abolished school fees and associated expenses like syllabus books, uniform, transportation etc.

(4) Where an adequate number of qualified teachers were employed.

(5) Wherever education has been incentivised especially for the marginalised children (like the mid- day meal scheme in India or conditional cash transfer schemes like Bolsa Escola in Brazil).

(6) Wherever the environment has been conducive to learning. This includes a child-friendly curriculum and the teaching medium being in the local language. It also includes special attention paid to infrastructure like better schools or a separate toilet for girls. Wherever safety and security have been given due attention.

(7) Wherever the hardest to reach category of children have been addressed and systematically and effectively linked with education sector planning. Here I am talking about child labour, children trafficked for forced labour, child slaves, child prostitutes, children of migrant parents, children with special needs, child marriages, children in armed conflict and fragile states, children living in remote areas, children from the minorities etc.

(8) Wherever social protection floor practices and decent working conditions have been ascertained for adults.

(9) Where ever civil society has been proactive and vigilant.

(10) Wherever the communities are sensitised, engaged and empowered, enrollment and retention rates have significantly climbed up.

So, what’s stopping us from replicating these tried and tested principles in every part of the world for the sake of our children? After all, what is more important than investing in our children?

It is very much possible to achieve Education for All goals only if we are globally organised and have honesty of purpose. If we have the political will and pledge adequate funding and financing. If we are able to build innovative partnerships to create new ways to get money for education. If we are able create a multilateral ambience and engage all stakeholders of the society. If we can do all of the above, we can surely achieve the goal, and that too within our lifetime.

We have to put our acts together to ensure that no child is bereft of education. Denial of education is violence against children. The future of humanity is at stake over here. We have to take a firm resolve that our generation will be the last generation to see illiteracy. Let us together make way for that golden period when our children would read in their history textbooks: “There once existed an evil called illiteracy…”