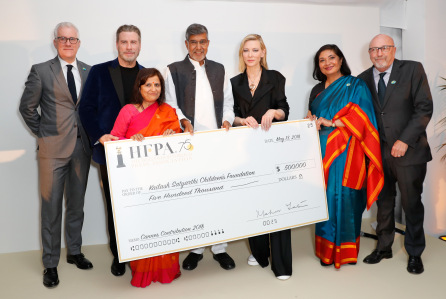 The Sunday rain downpours in Cannes didn’t destroy the mood at the annual Hollywood Foreign Press Association party here at Nikki Beach Sunday night where the HFPA donated $500,000 to Kailash Satyarthi Childrens Foundation , an organization dedicated to ending violence against children and child labor around the world. Jury President Cate Blanchett joined HFPA President Meher Tatna  in presenting the large check to Satyarthi , whose lifelong efforts in this regard won him the Nobel Peace Prize in 2014.  A new motion picture which premiered at Sundance ,where it won the U.S. Documentary Grand Jury Prize ,  will be shown in Cannes Tuesday,  follows him in this mission and has been produced by Participant Media and Concordia. It is planned for a wide ranging  release in the Fall.  Participant’s David Linde told me the company expects to announce a distribution deal on the film soon.  At an intimate dinner before the HFPA  party  Satyarthi expressed thanks to Participant for helping to get his message out.  “You partnered with us and we partnered with you in so many ways, ”  he said adding that he believes there is no problem in life that is born without a solution and expects to see an end  to all of this in his lifetime, hopefully in the next 20 years or so .  He noted that the numbers of children affected have already gone down from 260 million 15 years ago to 150 million today. That is still an astounding figure and the film is one way to put a human face on those statistics, the kind of  socially conscioius movie Participant was created for
.