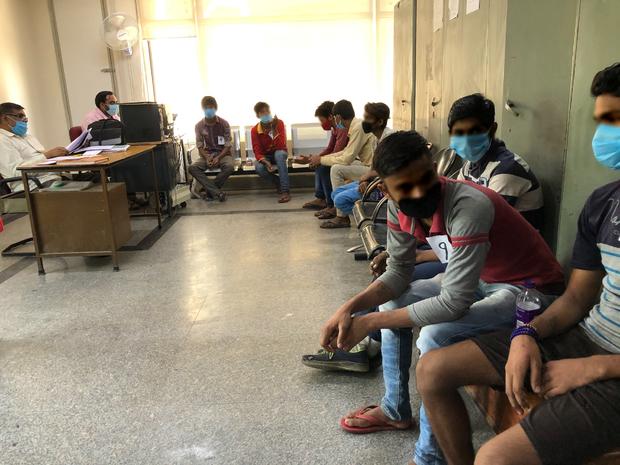 New Delhi — When India’s government imposed a strict lockdown in March to try to curb coronavirus infections, Sagheer Shah, a tailor in the small town of Faizabad, had to close his shop. For three months he didn’t earn a penny, burning through his savings to put food on table for his family.

He was able to reopen when restrictions started easing in July, but only saw a fraction of his previous trade resume. To make ends meet, he decided to send his 14-year-old son Asif, whose school was closed anyway, hundreds of miles away to Delhi to work in a car painting shop.

Asif spent a month working 9-hour days at the shop, learning how to prepare car bumpers for a fresh coat of paint, earning less than a dollar a day. Then on Tuesday, a team of child rights activists, government and police officials raided the shop and rescued him.

On the same day, the team found 11 other children working in small roadside restaurants in Delhi. They were working long hours washing dishes and serving food. Seven of the 12 children taken into protection by the authorities were under 14.

Indian law prohibits any employment of children under 14, except as child artists or in a family business. Kids between 14 and 18 can work in “non-hazardous” occupations, but many parents and employers have a poor understanding of that definition under the law.

India has had a huge child labor problem since long before the COVID-19 pandemic struck and drove even more kids into work. According to the most recent available government data — which is a decade old — more than 33 million children under the age of 18 work illegally in industries including mining, construction, garment fabrication and tobacco production. Many are exposed daily to hazardous working conditions.

Under India’s strict pandemic lockdown, all schools across the country of 1.3 billion people were closed. Hundreds of thousands of businesses went under and millions of people lost their jobs, spreading financial hardship across a whole new section of the population.

India saw its GDP for the first quarter shrink 23.9% this year compared to last, the worst downturn in four decades for the country that has been seen as a rising Asian economic power to rival China.

The government and child rights organizations fear the crashing economy and ongoing closure of all schools will push many other parents to send their children away to work — making them more vulnerable to child traffickers.

Thousands of raids like the one CBS News witnessed this week have been carried out in recent months.

“We have raided train stations and bus terminals in several cities and towns and managed to rescue thousands of children, but traffickers are coming up with new ways to bring children to bigger cities like Delhi and Mumbai,” Arshad Mehdi, who has led dozens of rescue raids for the Delhi-based child rights organization Bachpan Bachao Andolan, told CBS News.

Activist Kailash Satyarthi won a Nobel Peace Prize in 2014 for his four decades of work fighting child labor in India. He’s warned that the pandemic will increase the trafficking of children for labor and sexual abuse. Last month, along with a dozen other Nobel laureates, Satyarthi called on governments and organizations to put up $1 trillion to protect children globally from the impact of the coronavirus crisis.

Before COVID-19 spread, India actually seemed to be turning the tide on its child labor problem. But experts fear the pandemic will erase decades of hard-won progress.

“Because of the virus, a lot of families have been pushed into poverty,” Ashma (who uses only one name), of the Delhi Commission for Protection of Child Rights, told CBS News. “A lot of families don’t have the resources to survive. The only way out for them is that everyone should work.”

The father of another child rescued from the auto paint shop on Tuesday told CBS News that he pleaded with the shop’s owner, a friend of his, to put his son Mohit to work.

“My son was least interested in schooling,” Mohit’s father Uday Raj told CBS News. “If he’s not going to school, what’s wrong if he learns a skill and is able to earn some money for himself… should he rather sit idle at home?”

Mohit’s employer, Sachin, who is now under arrest, said he was just trying to help out his friend.

“I am not a big businessman… I belong to a poor family myself,” Sachin told CBS News. “I work out of a rented shop and house and have been hardly making any money during the coronavirus period.”

The government has asked him to deposit 60,000 India rupees (about $800) each in Asif and Mohit’s bank accounts, as wages. He will still face criminal prosecution for employing minors, but activists say convictions are extremely rare.

Earlier this month, India’s federal government left it up to state governments to decide whether schools should be reopened in mid-October. But even if classes resume, given the economic impact of the pandemic, many families may be reluctant to pull their children out of paying jobs.

The 12 children found in the Tuesday raid were placed under quarantine for 14 days and will remain in a home run by the Bachpan Bachao Andolan organization. Their parents will be called, given advice and possibly even provided some financial help, in the hope they won’t send their kids off to work again.