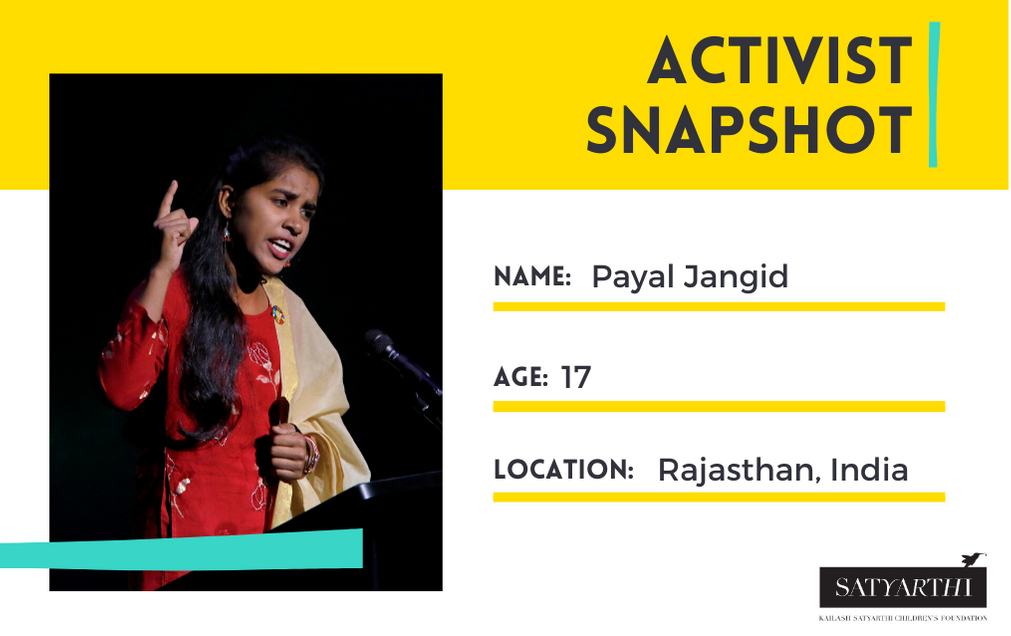 In 2012, Payal Jangid’s small village of Hinsla in Rajasthan, India became a child-friendly village – a model for development that protects children by ensuring their voices are central to the community. To mark the occasion, global child activists Kailash Satyarthi and Sumedha Kailash spoke to the community and their words sparked a fire in Payal, leading her to get more involved in child rights.

As she became more involved with community activism, at thirteen years old, Payal stopped her own arranged marriage (and that of her fifteen year old sister), going against long standing, archaic traditions. With the help of the Kailash Satyarthi Children’s Foundation, she convinced her parents that marrying at a young age was wrong and that her education was more important. Since then, she has been advocating for other young women and children.

Understanding that many of the issues in her community, from child marriage to child labor, are rooted in the lack of education, she has made it her mission to keep children in her village in school. From organizing rallies, spearheading activities, putting up posters and even going door to door to speak with village elders and families, Payal has created tangible change in her community. She has empowered other children and young women to voice their concerns and stand up for their own rights. As a result, child marriage has decreased in Hinsla and nearby villages and more children are completing their educations.

In India, it is estimated 1.5 million girls (27%) are married before the age of 18 each year. This number decreased by 20% between 2006 and 2016, largely because girls now have better access to education. Child-friendly villages also help mitigate the number of child marriages and other child exploitation by creating safe environments and empowering young people to have a voice in their communities.

Payal was elected leader of her village’s child parliament and leads group discussions with other young activists, talking through solutions to the problems they face. In 2019, Payal was awarded the prestigious Changemaker Award from the Bill and Melinda Gates Foundation Goalkeeper Global Awards. The global recognition for her fierce activism has only encouraged her to keep fighting for the rights of all children and work towards her dream of becoming an educator. We can’t wait to see what Payal does next and how she will inspire the next generation of youth activists.