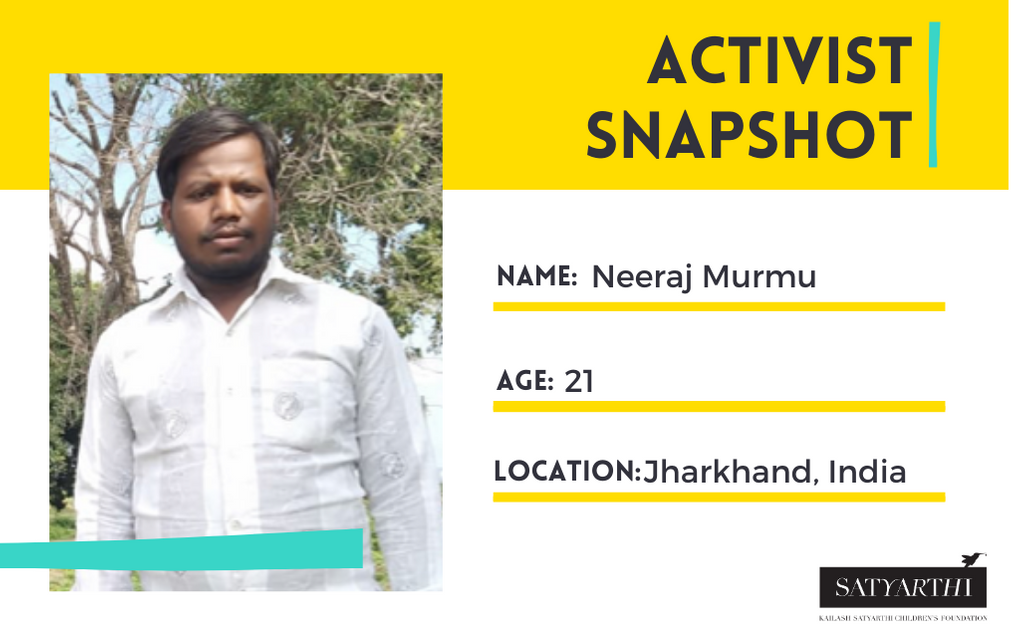 Neeraj Murmu used to work in the mines, excavating mica, a shimmery mineral widely used in makeup products, technology and automotives. He engaged in a hazardous, grueling occupation to help support his family with extra income.

Neeraj is from Giridih, Jharkhand and is a part of the Duliyakaram Child Friendly Village. In 2011, he was rescued from child labor by KSCF activists and was enrolled in school. Since then, Neeraj has been an unstoppable advocate for education and pledged to end child labor in his village.

In 2013, he joined his Child Friendly Village’s Yuva Mandal (youth group), and worked to enroll young people in his community in school. He also worked to address many socio-economic issues in his village, like facilitating electricity and gas connections in many households and constructing a water pump, all contributing greater economic stability among the community.

In 2014, he learned about four young boys who were migrating for work. He traveled across the country, met and counseled them, and convinced them to enroll in school instead. His passion to guide children to education intensified over the years and in 2018 Neeraj started his own school.

“I was inspired to establish a school as I could see the children in our village with no quality education because of unavailability of teachers. Hence I started this initiative of educating children in my village so that no child is left behind.” – Neeraj Murmu

Neeraj named his school, The Kailash Satyarthi School, which now provides free education to children susceptible to child labor and other exploitation. Neeraj has educated over 150 students in his village, helping them open doors to new opportunities and futures.

In Jharkhand, child labor in mica mines is a serious problem. In 2016, estimates revealed over 20,000 kids work in mica mines in Jharkhand and Bihar, a neighboring state. Some are as young as five years old and often suffering from physical injuries and respiratory illnesses. KSCF has been working to establish Child Friendly Villages in the area to give children a voice in their communities and inspire young people like Neeraj to take action to protect child rights.

In July 2020, Neeraj received the prestigious Diana Award, which according to the Times of India is “given to children aged between 9 and 25 years who have worked on issues related to social concern in memory of Princess Diana of Wales.” In an interview with Thomson Reuters Foundation, Neeraj explained, “I used to feel scared working in the mica mine, but there was no option. We had to do work to earn money.. but I tell parents now that children need to study.”

Congrats to Neeraj on this wonderful honor!