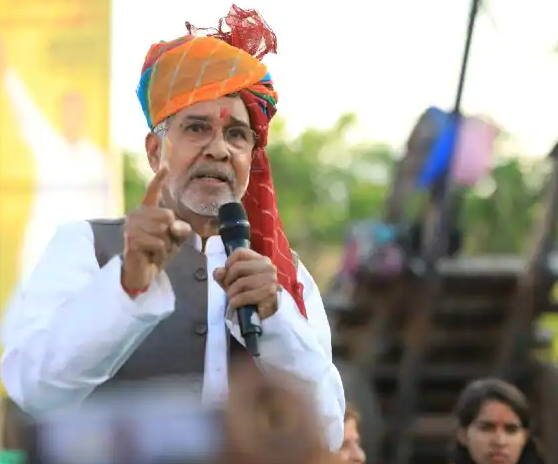 The campaign launch for ‘Child Marriage Free India’ was attended by around 20 million people and pledged to end child marriage.

Kailash Satyarthi Children’s Foundation (KSCF) led by Nobel laureate Kailash Satyarthi recently launched a nationwide campaign against child marriage with Liberian Nobel recipient, Leymah Gbowee at Navrangpura village in Virat Nagar, Rajasthan at a large public meeting. As a part of the campaign, 70,000 women and girls led people in lighting lamps, torchlight procession in around 10,000 villages (6,015 villages by KSCF and rest by government’s and other agencies) from over 500 districts in 26 states.

The campaign launch was attended by around 20 million people and pledged to end child marriage.

The event was marked by a united appeal women and girls who have been child marriage survivors and those young child leaders who have successfully stopped child marriages by to the nation to take a decisive stand against child marriage to end the scourge in our society.

Speaking at the event, Satyarthi said that child marriage is a “violation of human rights and dignity”.

“Child marriage is a violation of human rights and dignity, which unfortunately still has social acceptance. This social evil propels an unending list of crimes against children, especially against our daughters.”

He supported the Centre’s proposal to increase the marriageable age of girls from 18 to 21 and appealed to faith leaders to speak out and asked them to ensure that they do not perpetuate “this crime against children”.

He also made an appeal to people working as caterers, decorators, banquet hall owners, bands and others to not provide their services at such weddings.

“For those of you who are stopping child marriage in your villages, you are not alone.  I am with you.  As your brother, I will protect and support you in every possible manner.  I will not leave your side in this fight,” Satyarthi said.