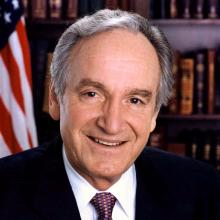 In 1974, Tom Harkin was elected to Congress from Iowa’s Fifth Congressional District. His energetic, person-to-person campaign carried the day against an incumbent in a long-standing Republican district.

In 1984, after serving 10 years in the U.S. House of Representatives, Tom challenged an incumbent Senator and won. Iowans returned him to the Senate in 1990, 1996 and again in 2002. In November 2008, Tom made history by becoming the first Iowa Democrat to win a fifth term in the U.S. Senate. In 2015, he retired after completing his fifth term in the United States Senate.

As a young senator, Tom was tapped by Senator Ted Kennedy to craft legislation to protect the civil rights of millions of Americans with physical and mental disabilities. Tom knew firsthand about the challenges facing people with disabilities from his late brother, Frank, who was deaf from an early age. What emerged from that process would later become Tom Harkin’s signature legislative achievement — The Americans with Disabilities Act (ADA).

As the chair of the Senate subcommittee that funds education, Tom fought toimprove education in Iowa and across the country. He has worked to reduce class size, give students better computer and Internet access, expand school counseling and safety programs and improve teacher training. He has also led the effort to modernize America’s school infrastructure. Each year he secured funding to help school districts in Iowa update and repair their facilities.

In September 2009, following the death of Senator Ted Kennedy, Tom Harkin became chairman of the Senate Health, Education, Labor and Pensions (HELP) Committee. Tom believed that to serve in this capacity is to carry on the legacy of Senator Kennedy, who dedicated his life to ensuring that our economy works for all Americans, guaranteeing every child the opportunity to pursue a quality education and, of course, the cause of Kennedy’s life: access to quality, affordable health care for all Americans.

The campaign to end child labor. Senator Harkin has been the most outspoken leader in Congress in the fight to root out the worst forms of childlabor. Insisting that the United States lead by example, in 1999 he persuaded the Clinton Administration to issue Executive Order 13126, the“Prohibition of Acquisition of Products Produced by Forced or Indentured Child Labor,” which remains in effect today. In June 1999, he accompanied President Clinton to Geneva to address the Inter- national Labor Organization, the United Nations agency that advocates for worker rights and expanded employment opportunities around the world. President Clinton urged members to adopt U.N. Convention 182, “On the Elimination of theWorst Forms of Child Labor,” and pledged to seek its ratification by the U.S. Just five months later, Senator Harkin, working with Senator JesseHelms, secured Senate ratification by a unanimous vote. This ratification was a catalyst leading in subsequent years to major reductions in child laboracross the world.

To help spearhead his efforts to eliminate the scourge of child labor, Senator Harkin worked to elevate the role of the U.S. Department of Labor’sInternational Labor Affairs Bureau (ILAB), which began working in 1993 to com- bat child labor. Between 1995 and 2013, Harkin secured $1.3billion for ILAB to promote labor standards in workplaces around the world and develop model programs on worker rights in countries with whichthe United States has trade preference programs. To date, almost $1 bil- lion has gone to support 278 projects to com- bat child labor in 94 countries.Projects have helped workers in countries around the world and improved the livelihoods for more than 160,000 vulnerable families. As a result, closeto 2 million children have been rescued from child labor through the provision of education, training services, and livelihood support for theirfamilies. ILAB continues to ensure that reliable data on child labor is collected and assists national governments in implementing effective policies tocombat child labor.

Establishing a protocol to combat child labor in the cocoa industry. To address widespread mistreatment of children working in the cocoa sector inWest Africa, Senator Harkin joined with Rep. Eliot Engel (D-NY) to hammer out the Harkin-Engel Protocol. Signed and wit- nessed in 2001 by the chief executives of eight global chocolate companies, the aim of the protocol is to eliminate the worst forms of child labor in the producing andprocessing of cocoa in Ivory Coast and Ghana. The protocol is a voluntary agreement among partnered governments, the global cocoa industry, cocoaproducers, cocoa laborers, and non-governmental organizations and requires a series of date-specific actions.

On September 13, 2010, on the 9th anniversary of the Protocol, Senator Harkin and Congress- man Engel signed a Declaration of Joint Actionestablishing further deadlines and setting the goal of reducing the worst forms of child labor in Ivory Coast and Ghana by 70 percent by the year 2020.The Declaration committed $10 million in additional funding from the U.S. Department of Labor, secured by Senator Harkin, to help remediate children caught in the worst forms of child labor. This Declaration included a $10 million commitment from the international chocolate and cocoa industry forprojects in West Africa to advance the goals of the Harkin Engel Protocol.

Senator Harkin’s four decades of leadership have left an enduring legacy by putting human rights at the center of U.S. foreign policy andliberating hundreds of thousands of children from the dangers and deprivations of the worst forms of child labor.